my mate – the prickly one – wants a backrub. he rarely wants one, so i know he’s feeling out of sorts.

we go to his bed for it. he lays front first with his back up, but keeps on his sweatpants and hoodie. i kneel next to him. i’m supposed to be working on his legs because they’re so sore, but i start on his lower back instead, with a verbal promise i’ll get to his legs in a moment.

i work on the soul spot first. often this is a good place to start. it’s always tight on people and they aren’t often that twitchy about it. i knead with the base of each palm for a while. then i press a single palm right onto the node and make circles. then knead some more, moving first up across the valley of the soul and then later down towards the tail bone. i don’t go too far down the tail for now.

then i move up his back. my mate always has tight shoulders. so i quickly knead up over his mid-back and stop at the heart node. here i work sideways for a while, trying to soften the tension point that he keeps there, just to the left of his spine, at the bottom edge of the shoulder blade. nearly everyone seems to have a tension spot here, one side or the other. my own is on the right side. i switch to knuckles and literally grind on the spot in question.

next i go up the inside of each shoulder blade toward his shoulders. i’m still using knuckles.

i pause at the shoulder node for a moment. this is the node in between the upper shoulders. it’s not a chakra, but it’s the center spot between the tips of each shoulder. rubbing just to the side of the spine right here, where it stretches into muscle, is critical. i once had a massage therapist call this the money spot, and say that she made all her money off being able to hit this spot on her clients.

when i get to the tops of the shoulders and lower neck, i switch to fingers for pressure. it’s okay to knead the upper-shoulder with thumbs at the same time. but the key here is to push inward on the body, never to pinch. there’s a big tendon in the shoulder junction here, and pinching it or lifting it up is usually terribly painful, and not a good kind of pain.

on the neck itself, i switch again to knuckles.

then i change direction and start going back down his back.

one thing of note – since tail to top of spine, at no point on the way up have i ever pushed on the spine directly. i’ve always been pushing just to the left or the right, into the muscles. now, on the way down, i’m going to violate that a time or two.

the big one is at his heart node. here, instead of pushing directly into the body, i push directionally inward, towards his spine. i’m using the base of my palm again, and i try it from both sides. one side – the right – wants to yield a little more than the left, and so i push all the way up and over the spine from that direction. he yelps a little. good yelp, i hope.

i work my way back toward his butt. this time i knead with knuckles a little deeper into the underwear region, mostly around the upper arc of each butt cheek, towards the outer hip.

finally, i skip over his butt, pick the closest leg, and start working on that.

my mate is relaxed enough now he sits up and takes off most of his clothes.

i suggest he stay face up for the legs, but he lays face down again. it’s fine. leg rubs are a bit easier face up i think, but the difference is negligible.

each leg i do in stages:

for calf, i work all the way around, from the muscles just to the sides of the front leg bone to the meaty part of the back. i work the ankle all the way into the top of the foot, but i do not rub the achilles tendon.

there’s a spot in the middle of the meaty section, where the thinner part of the calf suddenly becomes thicker, and right there in the back, if that spot is rubbed on me i’m usually squealing from how tight it is. at this spot my mate kind of grunts a little, so on him i dig my knuckles in more.

at the knee, the focus is on the sides. i’ll press over the back of the knee lightly with my thumbs, but hardly a glance. mostly i’m just – gently – making circles around the outside and inside knee. the front of his knees are all bruised right now, so i don’t even touch that part.

then i move into thigh. i start out by finding the tensest path from the outside knee upward. this is the I-T band, and it’s actually a tendon from calf to hip. mostly we don’t rub tendons, but this one is an exception, because it goes over muscle and those muscles are always bound up.

my mate has a high pain tolerance. at one point i push too hard and he grunts uncomfortably, but tells me to keep going. per his request, i don’t ease up, and keep kneading (base of palm) all the way up to his hip.

the inner thigh needs rubbed as well, but this is sensitive territory for most people. my mate knows me and trusts me, and i can work pretty much right up to the junction of his inside leg, but i don’t go straight for it. i start somewhere around the middle of the meaty part and work my way up, using a mostly flat hand and pressure from my fingers. i do not rub the taint directly, even though it’s a chakra.

then i close out the leg by working over the knee again. i’m a little firmer this time but still it’s a lighter touch than i would use on muscle. mostly i try to link everything i did together, from thigh to calf.

then i move over to where i can more easily reach his other leg and do it all again.

after second leg is done, he’s mellowed out and i can sit on top of him finally. so i do. i straddle him and start working on his soul node again.

this time i do work down deeper into his butt. i knuckle right on the big meaty part of each butt cheek. the secret here is directional – push that spot toward the soul chakra, not straight inward.

mostly i work on every part of the hip joint:

we already did the I-T band and the inner thigh. there’s two more spots on the front of the body but we’re not doing that today.

then i work up his spine again. briefly. we already fixed what we could, i’m just filing in gaps.

to that note, i work on his shoulders more. i skipped outer shoulders before, so i need to get them now. the secret on outer shoulders is again, directional. the lats are the muscles under the armpit on the back. pushing on them should be a direct inward push, toward my mate’s core, not downward against the bed. this can be super sensitive on some people. be gentle if needed. even my mate sometimes squeals here if i’m too firm.

i do his neck again in a little more detail. he helpfully presses his shoulders up, and i take the access offered and wrap my hands over the top of his shoulders to work the upper muscles of his chest for a moment with my fingers. these muscles are critical to the position of the shoulders, but often get missed, so i’m pretty happy to have the chance.

then i finish off with some more circular motions around the soul chakra itself.

finally i kiss the spot between his shoulders and slide off. 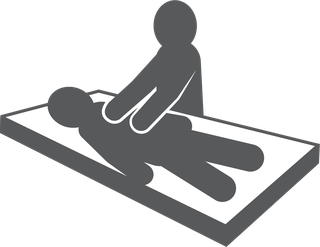